I’m writing this now while on a treadmill in the gym, the place where I am free from worries. The place where I look at my problems and come up with a plan to get over them. I zone out, nobody is in the room when I’m here. And that’s what everybody needs, a place to go and clear your mind.

In 2010 I was a lad of 19 years old with a beautiful wife, a young child but a mortgage that meant I was working 12-14 hour shifts nights and weekends to provide for my family. The recession hit and suddenly my hours were cut, wages halved and the cost of living was going up. As the man of the house, I felt like I couldn’t let this affect me. I went for countless job interviews at shops like Tesco, ASDA and Toys r’us. With me already having an income none of them offered me the role. Times were getting hard.

It was at this point I could hear somebody talking to me as if they were in the room with me. “What about life insurance?” And it actually made sense….that way I could ensure that my family were under a roof and had money to get by would be to use my life insurance policy. The mortgage would be paid off, they would have some money to help them get by and one less mouth to feed.

When I was about 15 I remembered going to the ice rink with my friends and learning that a man had jumped from the local car park to his death there. With the voice in my head I went to that car park and stood on the top floor and looked out. It was only the thought of not watching my daughter grow up which made me come down.

After that point, whenever something went wrong, be it at work or at home all I could hear was that voice again. “Is it worth it? Would they miss you? You’d have no more worries!”

I got to a point that I couldn’t afford the mortgage and living costs anymore. I sat down with my parents and agreed to move in with them while I saved up again. Things started to lift: my wife had started a new job and my daughter was at school, I had also started a new job. It was a fresh start.

The thoughts I was getting were becoming less constant and I felt that I had gotten over whatever was happening to me. I had still not spoken to anyone about what I had been though and I felt like I had won.

It wasn’t long however until suddenly it was back. I’m not sure what triggered it, but this dormant volcano had erupted. These voices were constant. I couldn’t walk over a bridge, walk along a road or even have a car journey without contemplating the easiest way of ending it. I had great friends in and out of work but I couldn’t talk to anyone about this. They wouldn’t understand….I don’t even understand it.

There was a chap who I had worked with for about four years. He was liked by everyone, was constantly doing charity work and in the whole time I knew him only got angry once. It felt like he was on this planet almost like a guardian angel to me. I asked him about his weekend plans one Friday and he said he was taking a friend who had some issues at home away on holiday. On Sunday I had a phone call asking if I knew where he was. He had come back from his weekend away and taken his own life.

It sent me over the edge. How? Why?

The next few weeks were awful. I had constant breakdowns at work and was just angry all the time. My wife was noticing and we had a few arguments which resulted in me saying the standard “nothing’s wrong” line. I started to have this crazy idea that this guy was meant to meet me, to show me the hurt that it would cause to hundreds of people if I took my own life.

I had yet another heated argument with my wife and suddenly it broke me. We sat down for hours and I told her everything. From the very start. One of the only times that I can say that I have cried in front of her. The whole night she never let me go. The next day we woke up and again she just held me.

I knew I had to talk about it.

I spoke to my best friend about it and he too just sat, listened and just took it all in. He convinced me to tell the football team that I played in and after a quick message on our Facebook group I was flooded with messages of support and congratulations for coming forward.

After telling my friends, I felt like I could talk to my sister. My sister…. the girl that I look up to and respect so much. I came round to her house for a cup of tea and we just sat and chatted. I told her everything and she just seemed to know what to do. She listened, she comforted and told me that I would get through it. And as always she was right.

I realised that I wasn’t alone. I had so many people around me that loved and cared for me. Anything that I was going through, I could talk about. It shouldn’t have took me so long to figure it out and I hope that anyone else suffering with depression realises this before it’s too late.

I started hitting the gym on a daily basis. The fact is that if you’re not happy with something it’s down to you to change something. I always felt like I was overweight and wanted to change. It started by me cutting out sugars from my diet. I would eat 3 chocolate bars a day easily. Crisps and other snacks also took a back seat. Sticking to the”clean meals” wherever I could. I soon saw my body change and wondered how far I could take it. Bodybuilding…..why not? I paid for a trainer to help with a training and diet plan and got to work.

On the 23rd April 2017 I entered my first Men’s Physique show and enjoyed every minute of it. I came off stage without a trophy but a huge grin and a new found love. I had indeed caught the body building bug. I started getting good. Then I came 5th in a competition and I was gutted. The voice in my head told me to quit. My wife told me to carry on or I would not be able to forgive myself and my daughter told me exactly what I had told her about her swimming lessons: “don’t quit at something if you find it hard – you must keep working at it until you can do it”. Both of them were right and hearing the lesson back from my daughter gave me an almighty surge of determination.

That voice in my head… I had to control him.

The next Sunday I went to another competition. Just making it there would be a win and that was all that mattered. And what happened next was something unexpected: I had so much confidence and drive that I ended up with 2nd place. But it wasn’t about the trophy or the invite to the finals.

The biggest win here was that I taught myself and my daughter that you should never quit. When you’re struggling for answers on your own, speak out. Talk to somebody and release that pressure on yourself.

I came off stage and couldn’t talk. I hugged my wife the tightest I ever have and for the first time in years I felt pure joy, delight and felt victorious. I rang my daughter and we had a conversation full of tears and laughter.

The next morning I went to my parents who were looking after my daughter. It felt like the right time. It was the last thing I needed to do. I started to tell my Mum about this journey and my Dad hugged me. Big deal??? Well yes, I have a great relationship with my parents but my Dad and I never hug! My last hug was the 12th May 2007 (My wedding day). All of a sudden the hardest thing I ever had to do was to not burst out with emotion. So this is dedicated to amazing parents who have done so much for me. The most generous, kind-hearted human beings.

The biggest lesson I’ve learned from all of this is that no matter what life throws at you there are always people who will listen to you. Keep your head up and always have some goal to work towards. Whether it’s in 1 month, 1 year or 10 years, have a goal, work towards it and smash the absolute s**t out of it.

My plan now is to try and help out with people who are suffering with depression. Now, I’m not expecting to heal people but I will be there for people, just there to listen, and with that and sharing my story I hope to help people get through those hard times. 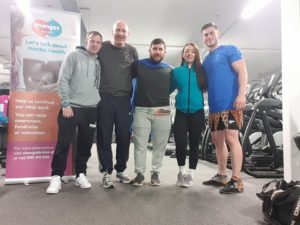 On 18th November 2019, Chris did an incredible 24 hour sponsored gym session to raise a whopping £1400 for Changes Bristol so that others can get the help they need. He had a whole host of people come and support, join in and talk.  Follow him on Instagram for more inspiration @chrisritchens